A lesson in life from a dog walker! 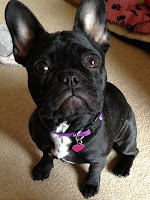 As a dog owner, one of the things that I really like is the automatic entrance to the dog walkers club! I’m talking of course about that unspoken bond between all dog walkers, which means you can strike up conversation with each other without being classified as weird!


Yesterday, whilst walking the dog, I got chatting to an elderly male dog walker who ended up telling me his whole life story! He was absolutely fascinating to listen to and remarkably spry for 84 years young. Apparently he had almost become a professional footballer (had once played opposite Bobby Charlton in a couple of matches) but ended up becoming a brick layer as the money (if you can believe it) was better!
He told me that he bought his house at 23 years old (a house he is still living in to this day), but that when he bought it lots of people accused him of being lucky.
“You’re so lucky to be able to afford a house” they would say, often with a tone of jealousy.

Now what was interesting to me was how angry this elderly gentleman got when he told this story to me. He said, “I wanted to hit them… how dare they accuse me of being lucky… everyday I left the house at 5.30am to do the 3 mile walk to the nearest bus stop so I could be at work for 8am… I would work until 7pm every night… normally 7 days a week. 3 nights a week I put myself through night school so I could get better qualified in order that I could get better paid! No this was not luck… this was a choice!”
At this moment I was reminded of a profound quote I had once read from an anonymous source:
“Winning is not normal and those who constantly win follow an ‘abnormal’ path.
The discipline, dedication and sacrifices are incomprehensible to those thousands standing outside, looking in, who are capable of joining the winning team, yet unwilling to pay the price of admission.”
So let me ask you… what do you want to achieve?
Are you willing to pay price of admission?